The next North East VMware User Group meeting will be on the 26th of November.

We’re keeping things fresh with a new venue. Campus North is a cool tech based venue and we hope that you like it. http://campusnorth.co.uk/

We have a pretty awesome agenda for you, the highlights are:

We also have a pretty cool set of giveaways.

Please check out the VMUG page and register as early as you can. It will be great to see you there.

Just like Mini-Me is a small but perfectly formed clone of the original, as will the Mini North East VMUG on the 25th of September at: 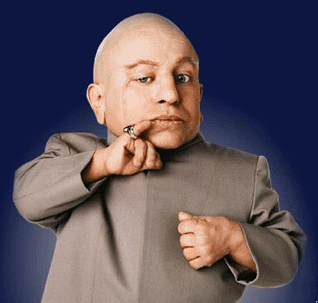 Why are we doing this, well we want your participation to make the North East VMUG the best it can be.

So if you would like to me more involved or even join the leadership team then sign up today and we look forward to seeing you on the 25th. https://www.vmug.com/p/cm/ld/fid=11656&source=5

Well 2014 has continued at the same momentum as the back end of 2013 for me. A slightly slower pace would be nice but as they say ‘its better to be busy than bored’.

But if like me you want to get out of the rat race for a day and come and learn some cool tech and experiences from the community then defiantly come along to the North East England VMUG.

This is my first VMUG on the leadership team and you will also get the pleasure (more likely displeasure) of my voice as MC for the day.

Also for the first time we have a round table session before the main show. For those that have attended the London VMUG these have proved hugely popular down south and having a community discussion really gives you a knowledge of where the industry is at and what innovative things people are doing. There’s no specific topic so we will just chew the fat on what is hot right now and has the communities interest.

It would be great to have a big crowd there for this event and show the North East is as eager to participate in the community as the rest of the country. There will also be some top speakers with Lee Dilworth and Hani El-Qasem speaking along with Michael Armstrong covering some great topics.

So come Join us on the 13th of March at the CastleGate for a great day.

A big thanks to Nimble Storage and 10Zig for sponsoring the event.

I’ve been meaning to post this for a week or so no but the day job has gotten in the way yet again.

I’m happy to announce that I have been accepted onto the leadership team of the North East VMUG.

As many of you might be aware (as if you know me you probably meet me there), I have been a regular attendee of VMUGs since about 2008, mainly the London VMUG (when I used to live in the warmer climate of Bournemouth). Since I moved back to the North East I have been a regular attendee of the North East England VMUG which has been gaining in popularity.

Being on the leadership team is great for me on a personal level, it allows me to combine 2 things that I’m very passionate about, the North East of England and Innovative cool technologies.

I have a few ideas that I will put to the rest of the leadership team but my main goal is to spread the word about VMware and its affiliated technologies to the North East. I get the same feeling about the North East VMUG as I did back in the early days of the London VMUG. Tons of potential and the people involved that can turn that potential into a reality.

I’m still to learn what exactly is involved but im very much looking forward to providing my services to make this VMUG the best it can be.

Its fair to say its been a while since I have posed anything on my blog.

As im sure many of you will know, sometimes real life gets in the way of these types of pursuits. As a result I was not awarded vExpert 2013

However, this will be changing!! I have decided to make time and get back into the community as much as I can. VMUGs are an awesome way of not only gaining some useful information but are a great incentive to be active in the community, and you meet some cool peeps.

On the 3rd of October I will be speaking at the North East VMUG for the first time. As I have been revising for some certs recently I thought VMware certification would be a good topic to cover.

VMware certification has come along way since I first became a VCP (way back in 2008 now,im getting old) and with the latest announcements around the new Associate qualifications there is a wealth of levels you can now cover.

As im pursuing my VCDX currently (fairly early in the process) I thought it might also be fun to have a little interactive session with the audience, a mini defense task perhaps. The person I think did best job will get a copy of John Arrasjids (and others) VCDX Boot Camp book.

As you can see the line up is awesome (well, ignoring me obviously), so im sure it will time well spent.

If you are North East based and can make the 3rd please do come along.

As ever I’m always keen on promoting VMware in my home area of the North East. Even though I live pretty much as far away as its possible to be in the UK from my beloved Sunderland I still like to keep my finger on the pulse.

The North East is about to get its first VMUG on December 6th at Ramside Hall Hotel & Golf Club (just outside of Sunderland).

While this is not up there with the mini VMworld agenda of the last UKVMUG it gives the opportunity to guys in the field of virtualisation to come and ask question of VMware employees and get technical updates.

The networking opportunities are always great at these events so if you are in the North East then you should try and get to this event.

I doubt Ill be able to get up there and attend myself but ill be up soon so keep an eye out for a vBeers event.